Today we are sharing pre-reading holiday music for your youngest learners. To be honest, we aren’t keen on the term “pre-reading” and only used it because it is a common term for students who are not reading music on a traditional staff.

And the reason we aren’t keen on the term is that in the WunderKeys Primer Piano program there is no such thing as pre-readers; instead, we call them early readers.

A pre-reader is a piano student who plays music notes that simply float on the page. And the reason they can play these notes is that they have a letter name inside.

In contrast, a WunderKeys Early Reader learns to play on the Wunder Staff. The Wunder Staff, unique to WunderKeys, puts alpha notes (notes containing letter names) on a modified music staff where students learn to recognize the placement of common notes and can clearly see notes stepping up, notes stepping down, or notes repeating.

In short, in the WunderKeys Primer program, our notes don’t float 🙂

So, if you have early readers who want to get in on the holiday music action, check out the Wunder Staff holiday piano pieces we are sharing in today’s post. 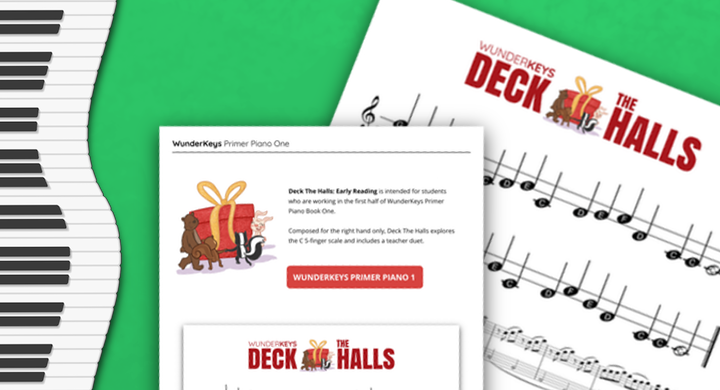 Today’s two early reading holiday piano pieces are intended to be used with piano students who are working in the first half of WunderKeys Primer 1 (before they have moved onto the traditional music staff).

You will notice that the piano pieces contain some skipping notes. This is a concept that is not introduced until Unit 7 of WunderKeys Primer 1, but because we needed to make these holiday tunes recognizable, skips were inevitable. We suggest taking some time to talk with your early readers about the identification of skipping notes.

Click on the button after the image to download Early Reading versions of Jingle Bells and Deck The Halls from the Members Only Printables section of the Growing With WunderKeys Toolkit. Remember to enter the password found in the email you received today. 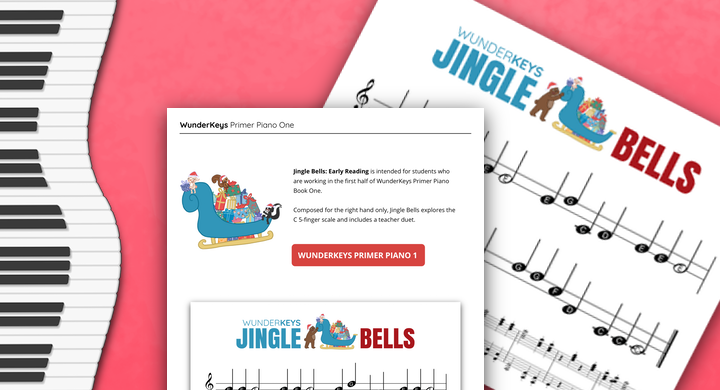 GET MY FREE PRINTABLE